Oceanic ecosystems are being put under extraordinary pressures by human activities, including overfishing, various kinds of pollution, and acidification and warming related to excessive CO2 emissions. It is therefore expected that the ocean ecosystems will look quite different at the end of this century than they did in the recent past. Our goal is to find out what will be their most likely fate under the anticipated climate change over the coming decades. We attempt this by using the most advanced global climate models, in which ocean life is described by a set of mathematical equations. Our research focus is directed towards phytoplankton, or planktonic algae, which, though being mostly microscopic in size, have a planetary importance: by producing organic chemical compounds from CO2, water and minerals in photosynthesis, they form the basis of nearly all oceanic food chains and have a great influence on atmospheric CO2 levels. Once carbon is fixed within organic mater, when organisms excrete it in the waste products of their metabolism or when they die, it can sink and become trapped in the deep ocean. This process, known as biological pump, is responsible for keeping a large portion of CO2 away from the atmosphere for centuries or even millennia, thus keeping the Earth cooler than it would otherwise be.

(1) Phytoplankton Ecology in latest-generation couple models
In order to discover the likely changes in phytoplankton biomass, photosynthetic productivity, and the strength of biological pump over the 21st century, our group has recently analyzed the output of numerous state-of-the-art global (CMIP5) climate models that include the mathematical descriptions of marine ecology.
We analyze the underlying physical drivers of phytoplankton biomass/productivity changes on various timescales (interannual, interdecadal, centennial), and the links between so-called climate modes (ENSO, NAO, PDO) and ocean phytoplankton ecology.

These climate models generally predict a global reduction of photosynthetic production and an overall weakening of the biological pump. This is largely due to the effect of climate warming on ocean physics in the low and midlatitudes: warming acts to make the water column more stratified, as the top layer of water becomes less dense and harder to mix with the denser layer beneath. This stratification makes it harder for minerals required in photosynthetic productivity to penetrate from the dark deep ocean, where they concentrate, into the sunlit surface ocean, where photosynthesis is possible. With less minerals available, the photosynthetic production of organic materials drops and, in response, less organic matter sinks into the ocean interior. 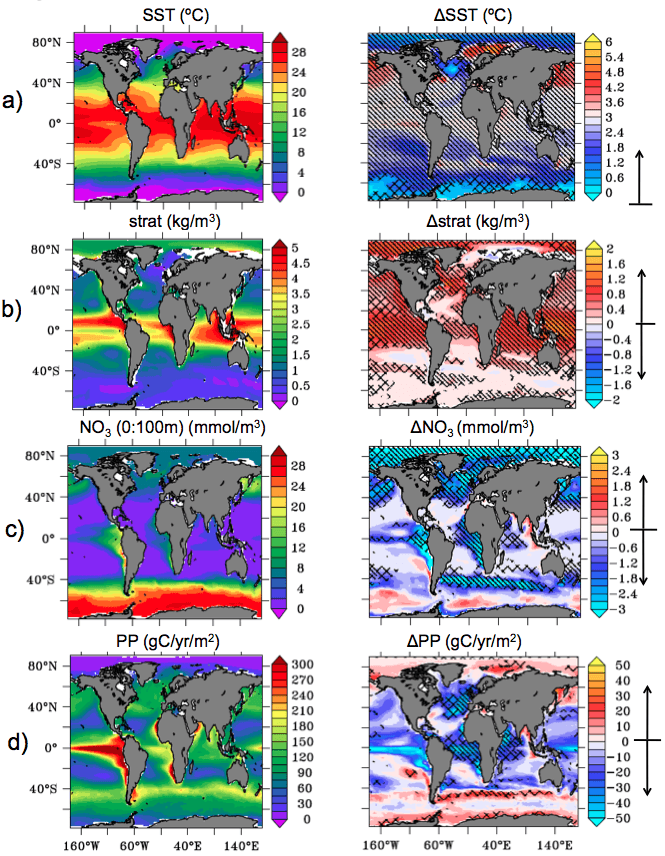 Maps of recent past (1980–1999 average) and modeled climate change signal (difference between the periods 2080–2099 and 1980–1999), averaged among 16 global climate models for the following variables: (a) sea surface temperature, (b) stratification (defined as the difference in water density between the 200-meter depth and the surface), (c) average concentration of the mineral nitrate in the top 100 meters, and (d) photosynthetic production integrated over the top 100 meters. Crossed masked areas show significant trends at the 8–90 % level, and stripped masked areas significance at more than 90 % level. Note large expected decreases in primary production in low latitudes over the coming century, driven by increased stratification and decreases in nutrients. Sample figure from Cabre et al. 2014

(2) Theoretical Developments
From a theoretical point of view, it is interesting to derive techniques and theories to evaluate and predict (a) the separate impacts of changes in light, nutrients and temperature on phytoplankton biomass and productivity and (b) the outcome of the competition between small and large phytoplankton in a changing physical environment. An example of this work is Marinov et al. 2011.

(3) The inclusion of biological evolution into climate models
Global climate models are presently not capable of simulating the evolution of life in a changed environment through the process of natural selection. Yet, it is likely that some species will not be able to survive in the world of changing climate, while others might evolve traits that will help them cope with the new normal. I am interested in introducing adaptation and evolutionary concepts from the theoretical ecology community into the ecological modules of our coupled ocean-atmosphere models. The goal is to represent many distinct types of marine phytoplankton in cutting-edge climate models (at present big climate models can only do about 3 types), and see how adapting/evolving phytoplankton species respond to 21st century climate warming. I am presently looking for PhD students with a background in theoretical ecology and mathematical ecology for this project.