Efrén C. Olivares is the Deputy Legal Director of the Immigrant Justice Project at Southern Poverty Law Center. He was the lead lawyer in a successful landmark petition to the Inter-American Commission on Human Rights on behalf of families separated under the Zero Tolerance policy.

Mr. Olivares is the author of My Boy Will Die of Sorrow: A Memoir of Immigration From the Front Lines. His memoir chronicles his work as a human rights lawyer in South Texas, braiding his own story as an immigrant with similar life experiences to that of his clients. Mr. Olivares’ book presents us with a deeply personal perspective that reframes the United States’ history as a nation of immigrants but also a nation against immigrants.

4 – 5 pm
A conversation with Efrén, law students, and members of the public. Efrén will be joining the class lecture on International and U.S. Refugee Law with Professor Fernando Chang-Muy. He will focus on the lived experience and intricacies and challenges of seeking asylum.

Thursday, September 29, 2 – 3 pm
Cafecito @ La Casa Latina (Suite G12), ARCH, 3601 Locust Walk (students and alumni)
Join us for an informal and intimate conversation with Efren to learn more about his journey to and through Penn.

7:30 pm
Reception and Book Signing
(Across the street)
Huntsman Program in International Studies and Business
The Lounge and Courtyard
3732 Locust Walk
Copies of My Boy Will Die of Sorrow will be available for purchase

Students, alumni, all members of the Penn community, and wider Philadelphia community are invited to attend, unless otherwise noted. More than a matter of partisan politics, conservatism is an under-explored aspect of Latino history, culture, and identity, and one that is necessary for understanding who Latinos are and have been in the fullest possible sense. The history of Latino conservatism from the 1950s to the present will be discussed, as well as its possible future trajectories.

Geraldo Cadava is a Professor of History and Director of the Latina and Latino Studies Program at Northwestern University. His areas of expertise are Latino history, the United States-Mexico borderlands, Latin American immigration to the United States, and American politics. by Domenic Vitiello
Associate Professor of City and Regional Planning

Professor Vitiello will discuss his recently published book about Central American, Southeast Asian, African, Arab, and Mexican communities in Philadelphia in the late 20th and 21st century. The book and his talk explore what sanctuary has meant for different groups of people at different times and places.

Professor of Sociology Chenoa Flippen, Ph.D., Director, Center for the Study of Ethnicity Race and Immigration (CSERI) will comment.

In The Sanctuary City, Domenic Vitiello argues that sanctuary means much more than the limited protections offered by city governments or churches sheltering immigrants from deportation. It is a wider set of protections and humanitarian support for vulnerable newcomers. Sanctuary cities are the places where immigrants and their allies create safe spaces to rebuild lives and communities, often through the work of social movements and community organizations or civil society.

Philadelphia has been an important center of sanctuary and reflects the growing diversity of American cities in recent decades. One result of this diversity is that sanctuary means different things for different immigrant, refugee, and receiving communities. Vitiello explores the migration, settlement, and local and transnational civil society of Central Americans, Southeast Asians, Liberians, Arabs, Mexicans, and their allies in the region across the late twentieth and early twenty-first centuries. Together, their experiences illuminate the diversity of immigrants and refugees in the United States and what is at stake for different people, and for all of us, in our immigration debates.

The book is available free online.

Haitian Migration through the Americas The sharp increase in Haitian migration in the past two years has garnered significant media attention as migrants have been met with opposition from border authorities. In an effort to better understand the structural conditions and individual experiences undergirding these changing migration patterns, speakers will discuss the past, present, and future of Haiti. Delving into the recent past and current conditions in Haiti, they will reflect on how history and spatial journeys can help us understand the challenges and experiences of contemporary migrants. With an eye towards the future, and moving beyond pure understanding towards collective action, speakers will propose steps that civil society organizations and governments, acting both at the national and international levels at home and abroad, could undertake to ameliorate the difficult situation of millions of Haitian citizens in and outside of Haiti.

Past, Present, and Future: Queer and Trans of Color Activism in Philadelphia

LGBTQ+ people of color have historically acted as political bridge-builders and radical change-makers on behalf of their multiple communities. Join three queer activists of color, Hanae Mason from Black Lives Matter Philadelphia, Jorian Rivera-Veintidos from GALAEI: QTBIPOC Radical Social Justice, and Dionne Stallworth, co-founder of the Transgender Health Action Coalition, for a discussion/teach-in and Q&A on queerness, race, and activism in Philadelphia. The conversation will be moderated by Kim Cardenas, PhD Candidate in Political Science.

Open to all members of the Penn community interested in issues of intersectionality. This day-long conference is designed to bring together faculty, graduate students, and undergraduates interested in Asian Americans, and race and ethnicity more broadly. For the past twenty years Asian Americans have experienced the most rapid growth of any ethno-racial population in the United States. Numbering over 22 million, Asian Americans trace their roots to more than 20 countries in East, Southeast, and South Asia. This diversity in origins is matched by tremendous variability in terms of socioeconomic status, religion, geographic location, experiences with discrimination, identity, political orientation, immigrant generation and legal status, and many other factors that are central to understanding Asian Americans’ position in U.S. society. Speakers at this event will address the complexities of Asian American identity, data and methodological innovations, the diversity of the U.S. Asian population, and Asian youth and activism. A conversation with Michael Jones-Correa, President’s Distinguished Professor of Political Science and Director of CSERI, on his new book. Holding Fast outlines the complex political situation in which Latino immigrants find themselves today and provides a nuanced, thoughtful outlook on the future of Latino civic participation.

Local Responses to Change in the Philadelphia Region:
Race, Class, and Immigration The Philadelphia region – both the city and its surrounding counties – has been transformed over the last decades, driven by economic and demographic changes like immigration, gentrification, and a racially diverse trend in movement to the suburbs. CSERI has invited a distinguished group of speakers from local governments, non-profit organizations, development organizations and service providers who will present insights on local efforts to address integration; housing, jobs and economic development; health, education and social services; and the role of county and local governments. 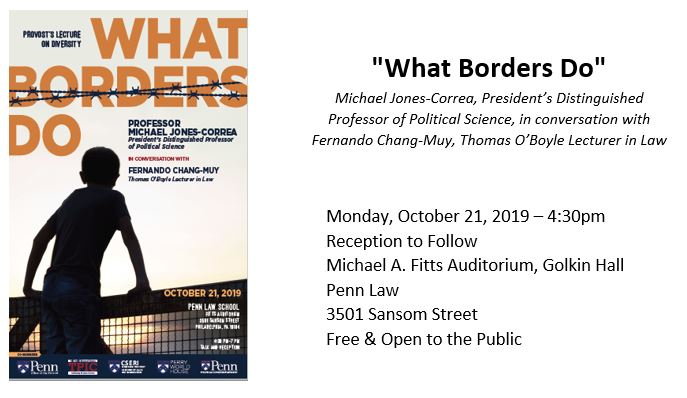 Immigration has been a vital political issue in both the United States and globally for decades, with economic, security, and humanitarian implications. The current federal administration has sharply increased the number of children separated from their families while seeking entry into the United States, and has limited immigration through capping refugee admissions at the lowest levels since 1980. President Trump has repeatedly expressed an intention to take actions including denying immigrants entry if they are likely to need public assistance, eliminating birthright citizenship, constructing a border wall with Mexico, aggressive deportation of undocumented immigrants, and temporary bans on Muslim immigration. The plight of migrants internationally has gripped the United States and Europe, as images of children in cages at the United States border and overloaded boats in the Mediterranean have become media fixtures.

This Provost’s Lecture on Diversity will illuminate political and practical concerns related to immigration as Michael Jones-Correa, the President’s Distinguished Professor of Political Science, explores “What Borders Do.” We often think of borders as walls. Borders are much more than that. In response to increased asylum seekers from around the world, developed nations are reconceiving their borders, pushing them out, and pulling them in. Professor Jones-Correa highlights the difficult issues raised by the re-imagination of borders and the trade-offs policymakers face. He will be joined by the Thomas O’Boyle Lecturer in Law, Fernando Chang-Muy, who will moderate audience questions. Professor Chang-Muy returns to Penn from a recent education campaign in Honduras to educate people about the legal obstacles, rights, and landscape of the trip to the north. The reception that follows the lecture, in Silverman Hall, will feature the photography of Mexican-American artist Ada Trillo, documenting the lives of asylum seekers at the U.S.-Mexico border. Many migrants around the world inhabit precarious statuses: living either partly or fully outside the boundaries of legal membership in their countries of residence, with consequences for their access to social services, rights and membership. This workshop explores ways migrants navigate incomplete membership and gaps in access with international participants addressing types of migrant precariousness and temporary statuses; how migrant precarity affects access to rights and services, ranging from education to health, to land ownership and local voting; how migrants have obtained pathways to membership; and the spaces in which migrants have pushed to acquire both rights, services and membership through civic engagement. University of Pennsylvania
Ronald O. Perelman Center
for Political Science and Economics
Auditorium
133 South 36th Street
Philadelphia, PA  19104
With the resurgence of fascism and xenophobia in the world, scholars and pundits have declared that democracy is in crisis. However, history reveals that democracies have always existed amidst systems that thrive on inequality.

This symposium will focus on two questions: