The Southern Ocean, the vast and largely unexplored ocean area surrounding Antarctica, is known to have a critical influence on our planet’s climate on millennial timescales. However, its role in global climate over shorter periods (centuries to decades or less) is not well known. This motivates us to study the behavior of the Southern Ocean physics in global climate simulations over the course of this century. Global warming that is expected to continue during the coming decades, along with a host of related changes (e.g. increased ice melting, stronger westerly winds associated with a more positive SAM or Southern Annular Mode), will most likely cause major shifts in the Southern Ocean currents. These shifts would have repercussions for the storage and distribution of heat, carbon, oxygen and nutrients not only in the region, but potentially around the entire World Ocean, as ocean currents connect into a global system of ocean circulation. Our ongoing research shows precisely how the signal of Southern Ocean change arrives to the low latitudes through ocean currents in a few short decades. This wide-ranging “communication” between the SSO and the rest of the world can happen much faster (within years or even months) via so-called atmospheric teleconnections. In this process, for example, changes in sea surface temperatures around Antarctica can trigger a cascade of changes in the atmosphere that can quickly traverse long distances and ultimately affect the patterns of rainfall around the Equator.

In one project we currently research the expected changes in Southern Ocean watermasses (the Antarctic Bottom Water, the Antarctic Intermediate and Mode Waters) over the 21st century (Marinov, Cabre and Dungee, in preparation). In climate models much of the formation of Southern Ocean deep waters happens via so-called open sea convection spots knows as polynias (holes in the ice). This naturally-occurring, periodic process happens in the GFDL model with a timescale of 50-80 years, and is reflected in CO2 fluxes, temperature, salinity, sea ice (see Figure below from Bernardello et al. 2014). In recent work (deLavergne et al. 2014), we have shown that climate-induced freshening of the ocean surface over the 21st century results in a permanent shut-down of these convection spots. We presently explore the implications of this shutdown of Southern Ocean convection for the oceanic heat and carbon budgets (Bernardello et al. 2015), but also for the storage and distribution of heat and precipitation patterns globally and in low latitudes (Marinov and Cabre, in preparation). 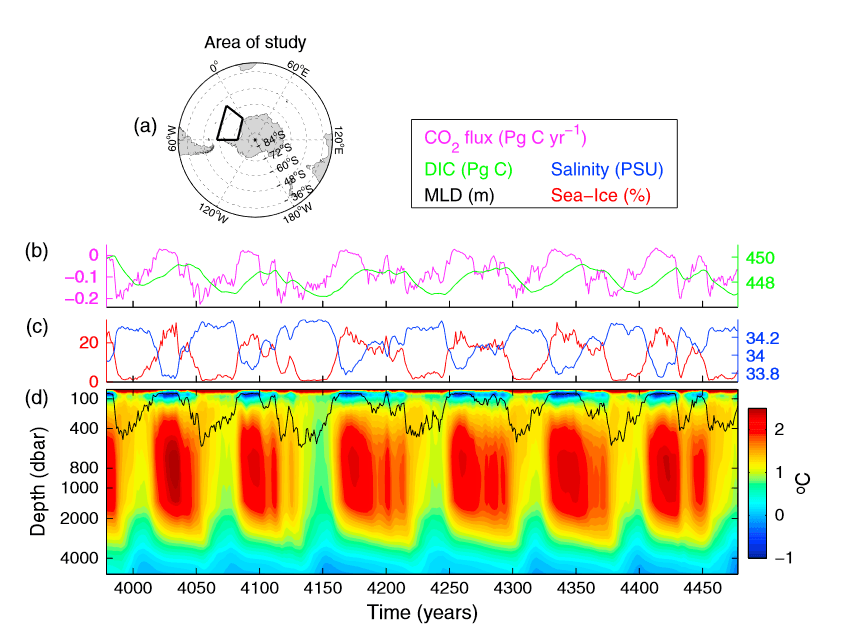 The oscillating character of the open sea convection in the Southern Ocean and the implications for physics and biogeochemistry. A CM2Mc climate model simulation of variability during a 500-year-long preindustrial period within (a) a Weddell Sea region for (b) area-integrated CO2 flux (magenta) and total mass of dissolved inorganic carbon (green), (c) spatially averaged sea-ice concentration (red) and salinity averaged both horizontally and vertically for the top 50 meters of the water column (blue), and (e) water temperature (colors) and mixed layer depth (black line) averaged over the study area. All quantities are yearly averages. From Bernardello et al., 2014. 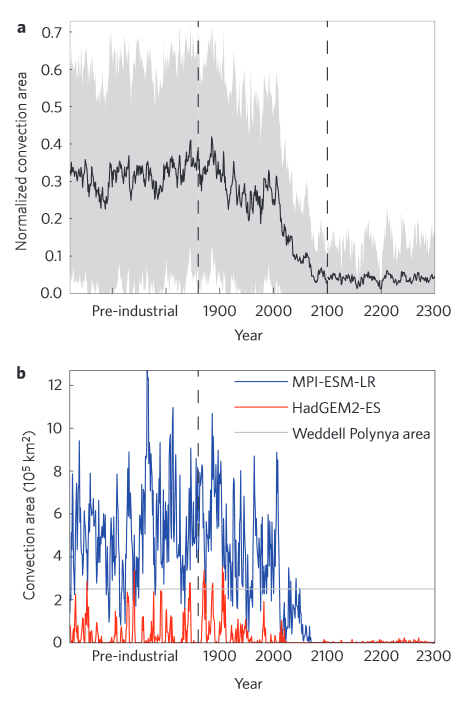 * Former postdoctoral researcher in our group.