Our Top 5/Bottom 5 of the Biennale The Australian pavilion was a breath of fresh air among all the video art at the pavillion. Rather than overwhelming the viewer with an endless stream of incoherent, uncontextualized video, Angelica Mesiti’s “ASSEMBLY” gave the viewer sufficient context to understand the 25 minute immersive video installation they were about to embark on. Sitting in a room meant to look like an Italian senate chamber, the viewer watches three screens playing simultaneously, videos of the coding of a poem which is then played on various instruments, in a dissonant and harmonious performance. Video artists Barbara Wagner and Benjamin de Burca create an installation piece of choreography for the Brazilian Pavilion. Titled Swinguerra, the show is a visual mashup of two words: a local dance, swingueira, and war, guerra. Popular culture is a powerful tool in contemporary Brazil and the duo explores the collision of national and international cultures in dance form. At a time when Brazil is in the midst of political and social tension, Swinguerra both emphasizes this struggle while also relieving some of it by utilizing popular songs. One can enjoy the colorful clothing and lively dance moves while simultaneously questioning what Brazilian contemporary culture is today and where it will go in the future. The Hong Kong Pavilion is a site-specific installation made by artist Shirley Tse, titled “Shareholders,” which manipulate found material such as metal, plastic, wood, and 3-D printed models made by the artist over the course of two years. The in-door installation, “Negotiated Differences,” is a skeletal structure made of interlocked beams of wood and plastic, at once penetrating and opening up the interior space of the gallery. The strings of molecule-like parts invoke themes of community-building but the delicateness of the appearance of the conjoined angles reveal the instability and precarity of the condition of “living in interesting times”–the central question which the Biennale discusses. The Polish Pavilion teaches us that we all have an imperative to critique the culture to which we belong. Roman Stanczak does just this with Flight; by turning a luxury private jet inside out, he exposes the severe downsides of Poland’s reckless transition to capitalism in the 20th century. While this era of economic prosperity propelled some into the realm of private planes, it left many others behind. According to Stanczak, there is a better way to view Polish history: while one could marvel at the technological advancements that embellished Poland’s swelling GDP, one should instead think about the massive class rifts created when only a select few are allowed to benefit from these advancements. After all, a private plane only has so many seats. The Switzerland Pavilion consists of a video installation that is set in a nightclub, with a digitally reversed playback of five dancers from diverse backgrounds. The video confronts issues of queer underground culture and reactionary backlashes by pulling inspiration from Kurdish guerilla techniques in which women would wear their shoes backwards as they walked so that the enemy would think they were actually moving forwards. The simplicity of the video and the fitting title Moving Backwards presents viewers with an important message about the need to collectively move backwards in order to then move forwards in an intolerant environment. The video is ultimately about acceptance and strength in numbers, which inspires viewers to think about what the nature of progress truly is.

Brooklyn-based Martine Gutierrez explores her trans Latinx woman identity in two mesmerizing series at the Biennale. The first, which is called Demons, alludes to her indigenous heritage of Mayan decent as well as Aztec and Yoruba deities. The wild goddesses she dresses herself up as are vivid and are meant to jump off the surface of the photograph. The second series is from a magazine she published by herself called Indigenous Women. Here we see her as a female figure interacting with mannequins in glorious settings by a pool. She is the center of attention in all these images as she always plays the role of subject, creator and muse in her work. Her explorations on concepts of gender, sexuality, social class and race attracts a lot of viewer attention with their colossal sizes and glamorous content. Akunyili Crosby’s large scale paintings were a pleasing highlight among other loud, showy pieces. Her work seeks to reflect the complexity of her Nigerian identity since emigrating to the United States when she was a teenager. In the Giardini, her use of multimedia collage conveyed the competing aspects of her culture, and she situated most of the canvases in different interior scenes with members of her family. Old photographs and painted forms fold into each other seamlessly. Though the work was breathtaking, its placement in a gallery space with several other attractions was rather disappointing. It would have been refreshing if these paintings were given ample space to allow viewers to be immersed in Akunyili Crosby’s limitless spaces and get lost in the endless patterns and relationships she creates. Dignity is only a recent development for mankind. In fact, in the thousands of years for which Homo sapiens have roamed the Earth, only several hundred were spent living in relative comfort. Ed Atkins reminds us of this fact with visceral acuity. He harkens back to a poor, agrarian lifestyle, when literacy, indoor plumbing, and even consistent access to food and water were as outlandish as space travel. Viewers must confront life-size videos of sniveling farmers going through the motions of their miserable lives, then read vivid depictions of the poor health, frigid conditions, and inescapable sense of ignorance that characterized them. We can’t help but mirror their expressions of pain. Although we may try to distance ourselves from it with mass-produced clothing and suburban homes, Atkins’ Old Food forces us to languish in our mortality. Haris Epaminonda’s installation VOL. XXVII at the Arsenale celebrates the quotidian and invites the viewer to step, twist, turn, lean forward, and look up within the exhibition space to discover instances of understated delights that may manifest just outside the corner of your eye. The mixed-media installation incorporates both mundane, found materials–such as bowls and plates–and artefacts that are infused with more symbolic and veneratory potential, such as miniature Buddha statuettes, bronze sculptures of female nudes, and gilded sheets that splay across the floor, transforming the space into a site of tender beholding and quiet contemplation. 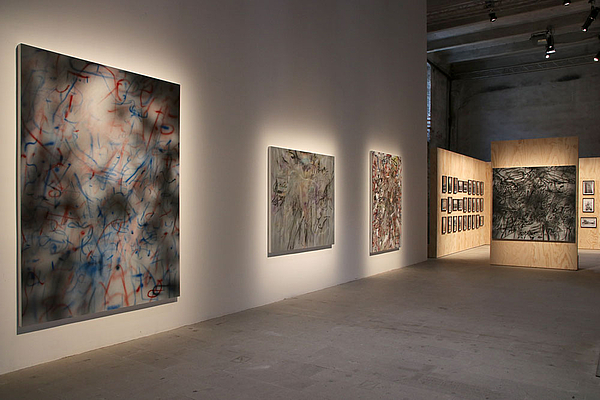 Though much of the Biennale seemed to have artwork that was trying to stand out, the paintings by Julie Mehretu stood out for the right reasons. The display of her artwork was underwhelming in a largely overcrowded space, but nonetheless her paintings were captivating. Upon closer inspection, the large scale paintings had iridescent qualities and were complex in their laying of various materials. Ultimately, Julie Mehretu’s work is very relevant to contemporary issues, responding to the Biennale theme of “May You Live in Interesting Times, reminding the viewer of global inequities. -NG

Natasha’s Thoughts on the Venice Biennale