The Penn Identity & Conflict Lab (PIC Lab) is a research group that studies inter-group conflict.  Our research is motivated by major problems of our time, such as civil war, ethnic violence, racial prejudice and religious intolerance.  We consider how social identities shape individual behavior, how conflict affects identities, and what interventions are effective in reducing conflict. PIC Lab identifies new research questions, produces cutting edge analysis and collects new data on a broad range of topics. The Lab promotes an inter-disciplinary, multi-method approach to the study of conflict and connects faculty, postdocs, and graduate students from different departments and schools across Penn and other universities. Why do native Europeans discriminate against Muslim immigrants? Can shared ideas between natives and immigrants reduce discrimination? We hypothesize that natives’ bias against Muslim immigrants is shaped by the belief that Muslims hold conservative attitudes about women’s rights and that this ideational basis for discrimination is more pronounced among native women. We test this hypothesis in a large-scale field experiment conducted in 25 cities across Germany, during which 3,797 unknowing bystanders were exposed to brief social encounters with confederates who revealed their ideas regarding gender roles. We find significant discrimination against Muslim women, but this discrimination is eliminated when Muslim women signal that they share progressive gender attitudes held by natives.

This project studies the conditions that lead peripheral minorities to identify with the state, their ethnic group, or neighboring countries. We contribute to research on separatism and irredentism by examining how violence, psychological distance, and national status determine identification. The analysis uses data from a novel experiment that randomized videos of actual violence in a large, representative survey of the Kashmir Valley region in the Indian state of Jammu and Kashmir, an enduring site of separatist and irredentist conflict. We find that a strong regional identity is a counter-weight to irredentism, but violent repression by the state can push members of the minority to identify with an irredentist neighbor. Violence increases perceived distance from the nation and reduces national identification. There is suggestive evidence that these effects are concentrated among individuals with attributes that otherwise predict higher levels of identification with the state. An increase in national status brought about by economic growth and information about integrative institutions are insufficient to induce national identification in a context where psychological distance from the nation is large. 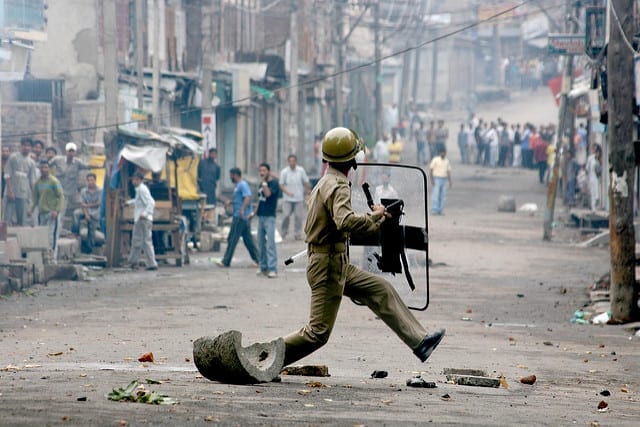 Most civil wars are preceded by nonviolent forms of conﬂict. While it is often assumed that violent and nonviolent conﬂicts are qualitatively different and have different causes, that assumption is rarely tested empirically. This article uses a two-step approach to explore whether political exclusion and lost autonomy—two common causes of civil war according to extant literature—are associated with the emergence of nonviolent separatist claims, with the escalation of nonviolent separatist claims to war, or both. Our analysis suggests that different types of grievances matter more at the nonviolent and violent stages of protest movements.